Inventors, Ashraf Mahomed and Asim Chaudhri, have answered the call for a solution to smartphone battery woes with a charging device that potentially boosts battery health. The Bluebat charging device also reduces the risk of overheating and battery explosions.

Smartphone users who are frustrated with replacing their batteries, may soon have access to a dynamic device that may extend battery life, if Leicester start-up, Bluebat, achieves its Kickstarter campaign goal to fund their BLUEBAT charging device.

Bluebat has turned to Kickstarter to raise funds to create the first device of its kind to address the common battery woes of smartphone users. Whilst most phone accessory brands make phones look good on the outside, Bluebat has decided to take on the challenge to tackle an issue that lies within. Prior to embarking on the journey to create the Bluebat charging device, the inventors conducted a study which revealed that over a third of respondents felt that they were charging their phones for too long. Moreover, about two thirds of the respondents had concerns about battery damage, overheating and overcharging, and only one in ten of them kept their phones at the recommended 40-80% charge. 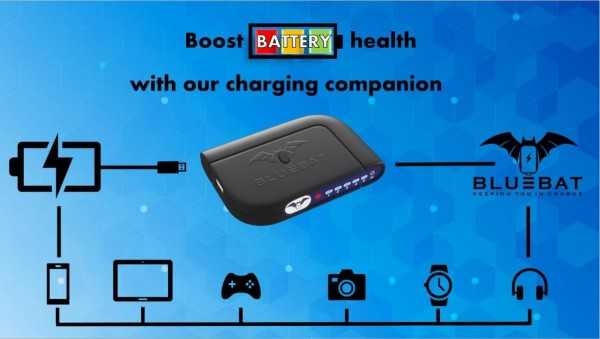 As mobile phones and devices become a bigger part of everyday life, the demand for more power, better performance and long lasting batteries is constantly increasing. The truth is that the average lifespan of lithium batteries is between two to three years; however, users can extend their battery life and capacity with simple charging techniques. Although experts recommend no more than 80% charge, monitoring the charging of a phone can be difficult. Sadly, most smartphone users tend to charge their batteries overnight, which leads to overcharging and also increases the risk of overheating and battery explosions.

Developed in the United Kingdom, with the help of a Leicester based design house, Bluefrog Design, the BLUEBAT BB-101 is an innovative charging device designed to help extend the life of smartphone batteries and boost battery performance. The device also mitigates issues such as overheating, overcharging and safety. Users have timing options such as charging duration and when to start charging. As it relates to safety, Bluebat smartphone battery booster boasts a heat sensor that will stop charging when the ambient temperature around the device gets too hot. This feature is especially useful for those who prefer overnight charging.

But Bluebat BB-101 is not just for charging smartphones. This device is also compatible with headsets, Bluetooth speakers, power banks, game controllers, watches and tablets.

Ashraf Mahomed and Asim Chaudhri are the masterminds behind the Bluebat charging technology. The idea for Bluebat stemmed from Ashraf’s own frustration with a poor battery performance of his smartphone. He said: “Asim and I were considering what our next venture could be. We both realised that we had issues with charging our phones and that’s how the idea for BLUEBAT came about.”

Anyone can support the Kickstarter campaign with as small donation, but a pledge for as little as £15 will be rewarded with a Bluebat BB-101 charging device. For further information or to back the campaign, visit: https://www.kickstarter.com/projects/bluebat/bluebat-keeping-you-in-charge.

New cryptocurrency Tagmoon is giving away a brand new Tesla. Here is how you win?

Bankavélli New Champagne For Investors And All

REITS and the future of Property Funds – HULT Private Capital

Inc 5000; The Ligon Group is No. 1887 on the annual Inc. 5000 list, the most prestigious ranking of the nation’s fastest-growing private companies