Trains are and have always been one of the greatest ways to travel. For long-distance travel they are comfortable, relaxing, and allow the passenger to really explore the outside world while whizzing past. Whether you are wanting a spectacular scenery train journey, or experience luxurious carriages, or experience what its like to be aboard a sleep, there is no better way to see the world than through a railway carriage.

When the arrival of the railways in Britain arrived in the 1800s, no one could have dreamt how advanced trains have become. Now, with new lines opened, and great railway journeys and some incredible trains including the Orient Express, people can now nearly anywhere in the world including Canada, Sub Saharan Africa, and Russia.

The Great Rail Journey In The World

To help those that love to travel to experience magical rail journeys, including steam train trips, we have put together the Great Train Journeys in The World.

For those looking for a long-distance train journey with a difference then how about Siberia. This is a truly an amazing, memorable winter holiday that is attracting people from all the world. It allows people to take in snow-capped mountain peaks, vast expanses of frozen wilderness and beautiful cities.

This is one of the best train journeys you can ever go on. It is the longest railway in the world measuring a staggering 5,772 miles. The Trans-Siberian is the ultimate long-distance train journey which takes you on a magical railway journey for 15 days.

The journey starts in Moscow where stunning architecture and real historic sites are there to appreciate. The next stop on the Golden Eagle Trans-Siberian rail journey is Vladimir which is one of the oldest regions in Russia. It’s truly a fascinating place with so much to see. The train then continues to Suzdal, Yekaterinburg, Novosibirsk while on route to Vladivostok.

One place that many of those on the train holiday look forward to is Irkutsk, which is known as the “Paris of Siberia”. Mongolia, Ulaan Baatar, which is the last stop before arriving in Vladivostok is another treat.

The views as you travel along Golden Eagle Trans-Siberian rail journey are truly unforgettable. Its like travelling through a magical winter wonderland while some have called it a frozen Pacific Ocean.

Another great railway journey runs from Chur and Moritz in eastern Switzerland and goes across the border to Tirano, which is in northern Italy. This is not a long rail journey like the route taken by Golden Eagle Trans-Siberian, but it’s still an experience.

The Bernina Express route has been described as one of the most scenic rail journeys in the world. The four-hour journey travels 90-miles through 55 tunnels and 196 bridges. When travelling on this route you need to get your camera out to take pictures of the sensational alpine landscape.

The Bernina Express is an incredible train. There is 1st and 2nd class coaches available to suit all budgets. The large windows all the way to the roof provides you with stunning views no matter where you are on the train.

The only real difference between 1st class and 2nd class is the spacious seats in the 1st class carriages. For when you get hungry there is a trolley service which provides drinks and snacks.

For those people who have ever wondered how the queen travels when she goes by rail then how about taking a train journey on Palace on Wheels. The train was original launched to promote tourism in Rajasthan by Indian Railways in association with Rajasthan Tourism Development Corporation.

In 2009 Palace on Wheels was refurbished with new décor. There are 14 splendidly regal carriages which are all named after Indian princely states. Each carriage contains antique furnishing with original artwork combined with modern amenities. While travelling on the Palace on Wheel you can choose to dine in one of the two restaurants or have a romantic meal in the Deluxe cabin.

Passengers onboard the Palace on Wheels are truly pampered. As well as having their own Deluxe cabin which comes with a bathroom, passengers also receive a personal butler.

The luxury train allows passengers to see India like never before. Over eight days, passengers are transported across the huge terrain of Rajasthan and Agra where they can experience the wonderful culture while being pampered. The train starts from New Delhi, and continues to various locations including Jaipur, The Pink City, Chittorgarh Hill Fort, and Udaipur, the City of Lakes, to name a few until the train returns to New Delhi.

The train journey is one for the bucket list. It is a once in a lifetime experience.

The Train to the Clouds

The Tren a las Nubes is a popular tourist train service in Salta Province, Argentina. It takes passengers along the eastern part of the Salta-Antofagasta railway line. The train service connects Argentine Northwest with the Chilean border in the Andes mountain range.

The train journey takes just seven hours where it takes people through the magical Andean scenery. It climbs to 13,850 ft above sea level making it the 5th highest railway in the world.

Those that love steam train rides don’t have to go very far for In2town Travel Magazine next great train journeys in the world. This one is in the UK and is the only steam timetabled service on the national network.

The “Road to the Isles” service is a 42-mile journey that takes passengers through mountain and glen. This amazing train journey provides impressive views from Britain’s highest mountain Ben Nevis to Europe’s deepest sweater loch.

Those that have travelled on the steam train have said it’s the greatest railway journey in the world. It’s not hard to see why people think The Jacobite is so special when you look at the steam train and the views it provides during its 42-mile journey.

A lot of people who come on the steam train ride come to look at the 21-arch Glenfinnan Viaduct which become a filming location for the Harry Potter films.

The railway line faced the axe in the sixties but thankfully it was saved, and now has become one the UK’s best loved steam train trips.

The Jacobite train runs provides a morning service from Monday 22nd April to Friday 25th October 2019 (Monday to Friday). Saturday and Sunday from Saturday 4th May to Sunday 29th September 2019. 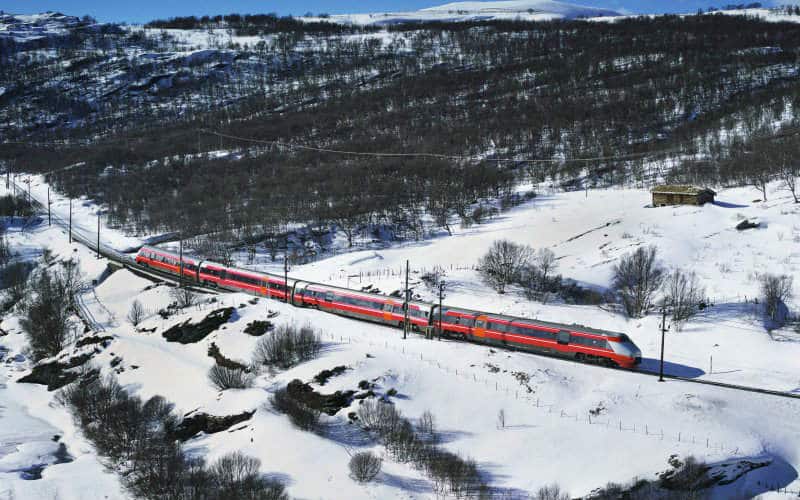 Travelling from Oslo to Bergen on the Bergensbanen train may not be one of the longest train journeys in the world, but it certainly is one of the best.

The rail journey between Oslo and Bergen travels through 180 tunnels and has 22 stops, which takes about seven hours. The 310-mile journey is the highest major rail route in Northern Europe and showcases some of the best Norwegian landscapes.

The Bergensbanen train journey is truly breathtaking no matter what time of year it is. Passing through the wild mountain terrain at 4,000ft in the summer where there is still snow is an experience that is hard to beat.

In 1894 it was decided to build a train line between Oslo and Bergen, and in 1909 it was completed. It has become one of the most famous railway journeys in the world.

Facebook
Twitter
Pinterest
WhatsApp
Previous articleCelebrity Interview Carol Smillie Says Don’t Worry About Your Baby Crying On A Plane
Next articleThings To Do In Puglia, Italy

With all those months of staying indoors and all those cancelled trips abroad due to COVID19, isn’t it about time we think about luxury...
Read more
Holiday Ideas

If you are fed up with the cold weather and sat there thinking how nice it would be to sit on a beach with...
Read more
Holiday Ideas

We look at dog-friendly cottages in Cornwall. With its stunning landscapes, scenery, and coastline, Cornwall has become one of the most visited and popular...
Read more
Holiday Ideas

With a huge array of accommodation in Spain, it’s hard to decide what hotel to stay at. But do you need to stay in...
Read more
Holiday Ideas

The most popular beer gardens in Australia are situated on Great Ocean Road. They are a great option if you’re in search of a...
Read more
Holiday Ideas

Geneva is a fantastic location to visit at any time of year. It's an affluent, exciting happening city with so much to see and...
Read more
Holiday Ideas

Saigon (Ho Chi Minh City) is the most populous city in Vietnam with a population of 8.4 million and is visited by 7.5 million...
Read more
Holiday Ideas

A survey conducted by Cosmopolitan magazine found that 40 per cent of women said their partners or husbands were not romantic. Another magazine asked...
Read more
Holiday Ideas

If you are going to Brazil then don't miss visiting Rio, the most exciting city on the planet. Rio de Janeiro has always been...
Read more
Holiday Ideas

Hue city is not only famous for wonderful historical sites and amazing cuisine, but also for its beautiful and attractive long beaches. The sandy...
Read more
Holiday Ideas

Travelling through the immeasurable beauty of Scotland is a treat, and if you manage to book a stay at a luxurious accommodation, that’s the...
Read more
Holiday Ideas

Things To Do in Puglia, Italy. Puglia, is a southern region that forms the heel of Italy’s boot. The stunning beaches, whitewashed hill towns,...
Read more
Holiday Ideas

Pig Beach got its name as its home to pigs. The true name of the island is Big Major’s Cay. Swimming with pigs is in...
Read more
Holiday Ideas

There are lot of things to do in San Francisco. The city is a magnificent place to visit and is known for its culture....
Read more
Holiday Ideas

Things To Do In San Sebastian, Spain

San Sebastian, Spain is a popular resort town on the Bay of Biscay in Spain’s mountainous Basque Country. There's lots of things to do...
Read more
Holiday Ideas

Things To Do In Innsbruck Austria

Innsbruck Things To Do   Innsbruck Austria, which is the capital city of Tyrol in Western Austria has become a huge favourite with those that love...
Read more
Holiday Ideas

Things To Do In Brussels Belgium and Places To Visit

Things To Do In Brussels   Our travel magazine team have visited Brussels to see what is on offer for UK tourists. If you are looking...
Read more
Holiday Ideas

Things To Do In Marbella Costa Del Sol

Slimwave EMS technology enables you to achieve your desired look

ASDA and Tesco Home Delivery Charges Should Be Scrapped