Amsterdam Holidays and Weekends Away

Holidays In Amsterdam Things To Do

is one of Europe’s most beautiful cities, rich in personality, history and culture. Yet, it doesn’t feel like a sprawling, busy city. Rolling outward from the central train station and defined by its intricate canal systems, Amsterdam is easily discovered by foot. The air is different here—offbeat and vibrant. Nothing can prepare you for your first visit here. It is a city not to see, but to experience.

Second only to Venice, Amsterdam has one of Europe’s most sophisticated canal systems. There is no better way to see Amsterdam than by navigating through its incredible circulatory system of canals. They really are as romantic and enchanting as they appear in pictures, and even more impressive from the viewpoint of a canal boat. Take a boat tour and glide along under brick bridges, past colorful houseboats, soaking it all in.

Your tour guide will point out the major sites, but don’t worry about paying too much attention to what’s what and where. Although the characteristics vary greatly to the trained eye, the 1,200 bridges and numerous canals look very similar to most visitors. So, you probably won’t be able to remember where that quaint little restaurant was. Just enjoy the experience and relax.

You can find several canal boat operators on the Damrak or Rokin. If you’re feeling energetic or prefer a more independent experience, there are a few places around the city to rent pedal boats. If you choose to rent a pedal boat, stay alert and bring a map—it’s easy to lose your bearings in the canals.

The Anne Frank Museum is a powerful, insightful and sobering look into the life of a young girl during the dark days of Europe’s World War II. At a time when Jewish citizens faced persecution by the Nazis, many families were forced to take drastic measures to avoid capture. The war became reality for Anne Frank and her family when they were forced to go into hiding to protect themselves.

In an attic above her father’s office, Anne spent several years in close quarters, living out the days of her young life under threat of the Nazis. During her years in hiding, Anne kept a diary of her daily life in the annex and dreamed of becoming a famous writer. The family was ultimately discovered by the Nazis, and Anne died in a concentration camp in 1945. Her father, Otto, survived the Holocaust and published Anne’s diary as a memorial to his daughter and to tell her exceptional story. The book, “The Diary of Anne Frank”, has become a beloved work, translated into hundreds of languages and published in countries throughout the world.

Museum visitors can walk through the house, in its original but preserved condition, viewing Anne’s personal keepsakes and catching a compelling glimpse into life in the secret annex. This is the most popular tourist attraction in Amsterdam. Lines are usually quite long, but the experience is more than worth it.

After only a few minutes here, you’ll feel as if you’ve stumbled into some “twilight zone” of a zoo or department store. In this oldest area of the city, narrow streets and alleys are lined with red lit windows displaying readily available, apparently bored prostitutes. Though surreal at first, the atmosphere is oddly compelling. The sheer selection of beckoning, scantily-clad women is enough to make anyone shudder in disbelief.

Prostitution is legal in The Netherlands, and is also highly regulated. The prostitutes are licensed and required to have regular medical checkups. The bedrooms behind the windows are plain and sterile—this is not an atmosphere for a romantic encounter, it’s strictly business.

Though it may be perceived as a seedy area, the Red Light District is actually quite safe—well monitored and crawling with tourists. A stroll through the area brings a new meaning to the term “window shopping”. If you’re looking for free entertainment, you’ll find it here. Watch your camera, though. Picture taking is highly discouraged and you may have your camera snatched if you are caught snapping photos.

No other museum or collection in the world exhibits more original work by Vincent Van Gogh than Amsterdam’s Van Gogh Museum. This is a spectacular collection, including more than 200 paintings, both famous and lesser-known. This is over half of all paintings Van Gogh completed in his lifetime. The stunning canvases are supplemented with written works, drawings and a historical library to give you a deeper understanding of Van Gogh’s extraordinary evolution as an artist and a man.

This museum will show you, but also take you further than the popular, living room works like “Starry Night” and “Sunflowers”. You will walk away fulfilled, learning more than you ever thought you would, or wanted to, about one of the world’s most talented artists.

A thorough tour will take half a day—grab a bite in the museum’s cafeteria. Before leaving the museum, don’t forget the obligatory gift shop visit.

Yes, marijuana is legal in Amsterdam — or at least it’s tolerated. The city has over 500 “coffeeshops” with extensive menus of the green stuff. You will recognize them by their clever names and leafy decor. Patrons can buy a bag of marijuana or hashish at the counter and sit down with a hot drink for a relaxing smoke. Some coffeeshops even have outside patios where you can sit on the sidewalk and smoke as people pass by. Although many non-Amsterdamers may feel nervous about such a public display, no one will look twice at you. Even if smoking isn’t on your travel agenda, stop in for a coffee just to take in the atmosphere. If you’re inclined to partake in smoking marijuana, buy it at an established coffeeshop and never on the street.

The city is also peppered with a few establishments called “smart shops”. These places sell natural hallucinogenics such as psilocybin mushrooms and peyote. Hard drugs such as cocaine, LSD, ecstasy and heroin, however, are not tolerated and carry strict legal penalties. Street dealers stand on the canal bridges near the red light district and may whisper their hard drug offerings to you. Just ignore them.

Contrary to what some might think, Amsterdam is not a city full of hippies and drug addicts. The mentality is just one that tolerates personal freedoms in all its forms. The offbeat charm is what makes Amsterdam so lovable. 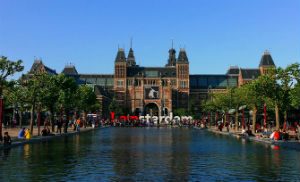 Considered the “national treasure of the Netherlands”, the Rijksmuseum exhibits the Netherlands’ largest collection of art and historical pieces from the Middle Ages through the nineteenth century. Masterful works by some of the world’s most acclaimed artists are on display including the museum’s prized piece, Rembrant’s “Night Watch”.

The museum’s exterior is a work of art in its own right, with a striking and dramatic architectural design. The Rijksmuseum is well worth a visit for those who appreciate art in all its forms.

If you’ve had enough of grandiose fine art museums, the original Heineken brewery is a museum of a different color—green. The historic building was erected in 1867 and brewed Heineken, one of the world’s most popular beers, there until 1988. Although Heineken is no longer made in the Amsterdam brewery, the building has been transformed into a permanent exhibition called the Heineken Experience.

Dedicated to everything Heineken, the Heineken Experience takes visitors on an interactive, beer-soaked journey from the first bottling to the technological innovations that revolutionized the brewing industry. Finish the tour with a frosty beverage .

Visitors must be at least 18 or accompanied by a parent.

The ideal place to spend a sunny, lazy afternoon, Vondelpark is the recreational center of Amsterdam. Popular with visitors and locals, the park is close to the trendy Leidesplein and popular museums—a perfect place to pause on a whirlwind sight-seeing itinerary. In the summer, you might catch a free theater performance on the park’s open stage. There are also bars and a restaurant where you can relax and restore your energy. The park is easy to find—look for the big green area on any city map.