HomeCelebritiesRapper YungGlitzyBoy Talks About The Killing Of George Floyd and Black Lives...
Celebrities

On May 25, 2020, the world became united after a shocking event took place. That shocking event was the killing of an unarmed and innocent man called George Floyd.

The Minneapolis Police Department received a call from a teenage grocery store worker from  Cup Foods in Minneapolis who claimed George Floyd had purchased cigarettes using a forged $20 note. Officers responded to the call, and what happened next shocked the world.

George Floyd died after officers did not step in

George Floyd, 46, died after being arrested by police outside a shop in Minneapolis, Minnesota. His death should never have happened. A white Minneapolis police officer by the name of Derek Chauvin who has since been charged with the murder of George Floyd, pinned him to the floor and kneeled on his neck for more than eight minutes. Other officers who have also been charged stood there and did nothing.

We would like to believe as human beings that this was an isolated incident, but sadly it was not. This type of event keeps on happening, and happens so much that some black people are scared to walk the street and fear for their lives when a police officer stops them.

The Black Lives Matter movement is hoping to make a real change, but will the change happen? We spoke to Chicago Born Rapper YungGlitzyBoy about George Floyd and what it was like to be afraid of the police, and be a Black Man in the USA. 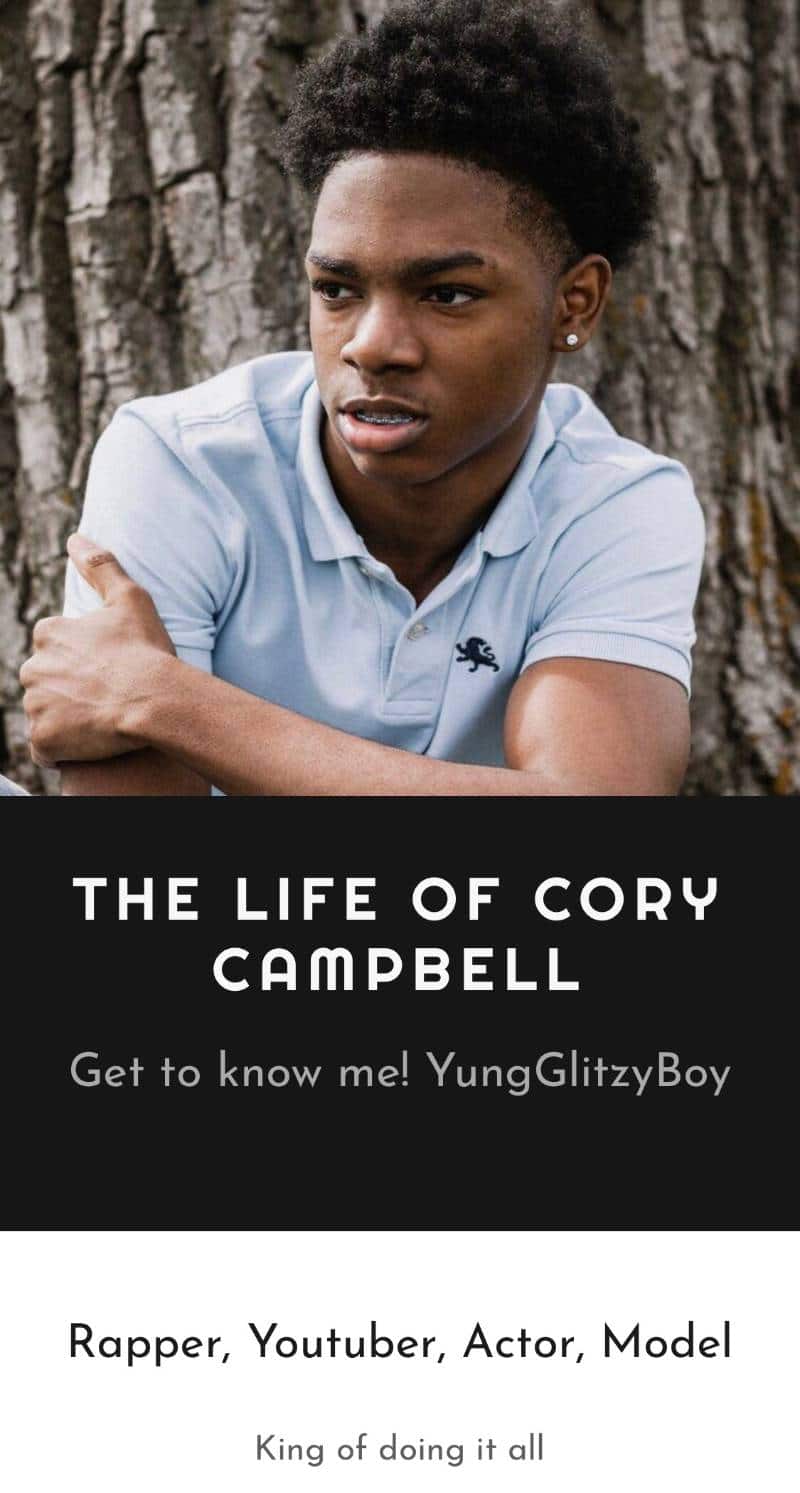 For people who do not know you, can you introduce yourself?

I’m a 17 year old rapper from Chicago known as YungGlitzyBoy which means shine because I love to flex, I make music people can feel like my viral moment remix was for people with depression and anxiety so I’m a thoughtful artist. Features coming soon also!!

YungGlitzyBoy, as a Black Rapper/Actor what are your thoughts on the Killing of George Floyd?

I think the police was sick in the head if the man is not resisting and even tells you he has breathing problems why wouldn’t u just handcuff him and stand by him instead of kneeing on him that’s not right.

Does it make sense to you that for 8 minutes and 46 seconds, Derek Chauvin pressed his knee into the neck of George Floyd, an unarmed Black man and none of the other officers used their common sense to drag the officer off?

No it makes no sense they treated him like a dog because he was black and they’re wrong.

After George Floyd was murdered, lets not call it a killing, lets call it what it really was, murder, did it surprise you to then find another black man was killed by an Atlanta officer who fatally shot Rayshard Brooks?

No because black people die everyday it’s just sad how we pick and choose who needs to be praised after death or not. In my opinion when a famous black person dies everyone’s mad but a unknown nobody ever finds out. It’s sad.

That’s not true. Police officers are behind the gun, they kill us like it’s a video game they claim there scared of a unarmed black, we reach or do anything they hesitate don’t think twice and they shoot.

Because we stood up and felt we would fight for what’s right and the police being angry felt forcing us to cooperate was best which isn’t.

A report found, that if you are stopped and arrested in the U.S.A, Black or white, you are more likely to die in police custody than in any other country, why do you think that is?

This is a dangerous place and the police are always so scared when they see a black person u bend down or reach or touch anything they panic and shoot.

YungGlitzyBoy, With news that you are more likely to die in custody in the USA than in any other country, do you believe this is down to police wearing guns, or do you think this is down to training, or some police officers being totally out of control?

I think it’s about police being out of control and wearing guns because they get to nervous.

With more people dying in police custody than in any other country, are we saying a minority of the police think they can do what they want and get away with it?

Yes, because they know if they do something they can back it up by having other officers cover or build a lie so while we suffer they go home like nothing happened.

With that shocking figure, do you feel safe walking the streets in the US, and driving around?

No because I feel the police would lie and say I match a description just to attack me or lock me up for no reason I live in Chicago it’s worse.

YungGlitzyBoy, Have you ever been stopped by the police, and if so can you share your experience?

Yes by my house and he was angry. I had a fur coat on and chains and asked what do I do. I said acting rapping and he said oh and just walked off a drove off so he wasted my time.

What advice would you give to a black man to keep them safe if they are stopped by police?

Hands on steering wheel, be respectful and calm and listen.

Black Lives Matter protests have been happening all around the world, did you go on one?

No because in Chicago kids are just going out because they’re tired of being on lockdown, they’re breaking in stores like that will solve anything, what happened to peaceful protest!!

It makes me angry that kids are out of control like we’re on lockdown your stealing things to go right back home. Might as well call it “home drip”.

Whoopi Goldberg wants police departments to re-teach cops “how to police” following the Black Lives Matter movement, do you agree?

Yes I agree with Whoopi Goldberg

Steve Harvey said this week, “I’m so sick of racism. I’m so sick of having to have dealt with it my entire life,” why do you think we still have racism in the world?

Because some whites feel like they are better and they’re jealous that blacks are smarter, better looking and some even more money so you wouldn’t expect us to go from slavery to smart successful and rich.

Some black people have come forward and said there is also racism in the Black community against white people, would you agree with that?

Probably yes only because how much whites harm blacks and make false police complaints and say and do things and get away with it.

As a Black man, what is the biggest hurdle you have had to come across?

My biggest hurdle was the police killing my friend for getting his drivers License after they told him and having the other officer drive me home.

How does it make you feel that you have a President with Donald Trump who has done nothing to put an end to Racism or support real change?

I’ve been angry Donald trump has made this world worse we need a president who cares like Barack Obama who cared about blacks, whites and all races.

When Barack Obama became President, tens of millions of people around the world thought this was it, a real change was going to happen around the world, Racism was going to be challenged and overcome. However, a lot of people Black and White have said they felt let down by President Barack Obama because he wasted his Presidency and didn’t do much for the Black community or to stamp out racism, what is your opinion on that?

That’s not true in my eyes the world wasn’t out of control when he was president and people loved to listen to him even if you go on his Instagram to this day he still preaches and uploads it on his page and gets millions of views and likes. He’s a true leader.

As a Rapper, do you believe that music can help with the Black Lives matter cause?

Yes I feel lil baby, Polo G, DQJ are really taking this matter serious and being famous knowing they have attention them releasing that type of music was smart.

Would you like to see a super group come forward with big named singers like they did with We Are The World for Africa, to bring out a song to fight racism?

Yes that would be awesome because more people would listen.

As a rapper, do you intend to bring out a song to help fight Racism?

Yes I’m working on a song now to help fight racism follow me on Spotify and stay in tune for it!!

Singer B. HOWARD Talks About COVID-19 And His New Single We ARE Champions